2-0, 3 to go...
That's all we have from this game. India lead the series 2-0. West Indies' downfall has a sorry face to it. Their body language hardly inspires confidence. Perhaps change of venues might do it for them. The stay in St. Lucia has ended. The final phase of the tour is in Guyana, where the remaining three T20Is will be played. The third game is on Thursday (November 14). We hope to have your company for that match. Till then, take care, aficionados!
Player of the Match
For her 4-0-10-4, Deepti Sharma was adjudged the player of the match: Obviously feels good to execute the plans and I stuck to my strengths. I was confident because of the performance in the last match that resulted in a win. The weather in the West Indies is fine and not hot. So we’re having fun and all’s good.

Captainspeak IND
Harmanpreet Kaur: We are really happy to see the crowd, that’s what we were missing. It was a great partnership between Shafali Verma and Smriti Mandhana and was a good bowling performance as well. We were expecting five games in St. Lucia as we love the atmosphere here.
Captainspeak WI
Anisa Mohammed: It has been really tough. The batters aren’t putting the runs on the board. We have quite a loss of some young players and are lacking some senior players as well. It's up to the youngsters to put their hand up. Hopefully we will be able to put some runs on the board. Can’t expect the bowlers to win us the games always.
In short
India and West Indies seemed on different levels. While the hosts huffed and puffed their way to a above-100 total, for the tourists it was a walk in the park as they hardly broke a sweat, achieving yet another huge win. This is India's biggest win in terms of balls to spare. Meanwhile, this is West Indies' maiden ten-wicket loss. These two facts highlight the difference between the two sides. Let's await the presentations and get to know what the captains have to say. There could be an interesting toss-up between Shafali and Deepti Sharma for the player of the match award... 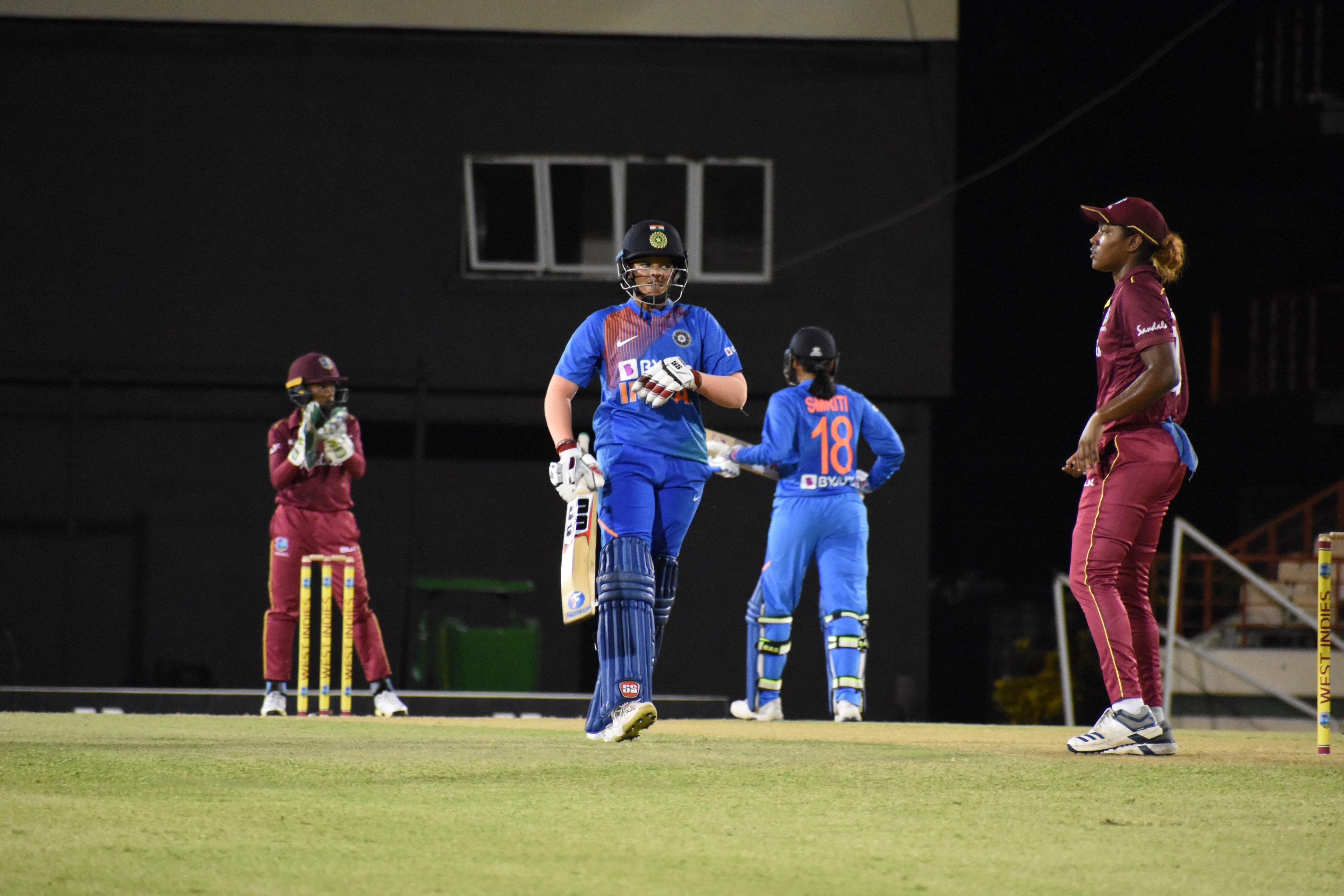 All over
IND 104/0 in 10.3 overs. Shafali Verma and Smriti Mandhana carried their bat as India won by 10 wickets. It was a clinical win for the tourists, who lead the series 2-0. No bowler from West Indies came close to stopping either of the openers. It was a thoroughly dominating performance by them, specially by Shafali, who finished undefeated on 69 off 35 balls. Mandhana was not out on 30.
Super Shafali!
IND 78/0 in 8 overs, need 26 more. Back-to-back fifties for Shafali Verma. She has perhaps shown that her innings in the first T20I wasn't a fluke. She got to the landmark by moving to the off side and hitting a shortish Hayley Matthews ball over deep square leg for half a dozen. She took just 26 balls to get there, as opposed to 30 balls in the first game. Hayley Matthews, as a result, was taken for 11 off her first over.

High on runs
IND 64/0 in 6 overs, need 40 in 84 balls. Shafali Verma and Smriti Mandhana strung consecutive fifty-plus stands and have effectively sealed the game. They have already scored more than half the required runs within the first power play. The young Shafali is in sight of yet another half century...
Early finish?
IND 37/0 in 3 overs, need 67 in 102 balls. India have yet again got off to a flier, thanks to Shafali Verma, who is on 28 off 11. Smriti Mandhana at the other end has been happy to give the strike back to her young partner. West Indies' seamers seem clueless about getting the breakthrough.
Resuming...
IND 18/0 in 1 over. Shafali Verma has began from where she signed off last night. She hits four fours in the opening over from Chinelle Henry. One of them featured a Natasha McLean misfield. How will West Indies stop Shafali?
Briefly speaking...
It was yet another sorry batting display from West Indies. They never got going after choosing to bat. India's bowlers kept the pressure all through the innings. Only when Chedean Nation and Natasha McLean were chugging along in their 32-run stand did they seem like putting a competitive score. But Deepti Sharma's return in the death sounded the death knell for the hosts. India, as a result, aren't chasing a tall total. The home side would have to bowl out of their skins to make a fist out of this. Will they?

Deepti Sharma’s four-wicket haul and yet another dominating opening stand between Shafali Verma and Smriti Mandhana, headlined by the former’s second consecutive half century, helped India beat West Indies by ten wickets in the second T20I at the Darren Sammy National Stadium in St. Lucia. It was the last game at the venue before the teams move to Guyana for the final three T20Is. “We’re going to allow our batters to play freely,” claimed Anisa Mohammed at the toss, after choosing to bat. But the start they had was far from ideal. In what was a different opening combination for West…