Wrapping up...
So! 1-1 with a game to go. A series can't be more competitive that this. Apart from the series win, there are two Championship points at stake. The final ODI is a day affair unlike the first two matches. Thus, teams will have to adjust accordingly. We hope you enjoyed our coverage as much as we did in getting it to you. See you on November 6 for the final ODI! Till then, take care! Adios!!!
Player of the Match
Punam Raut: It was an important game for us and the wicket wasn’t easy to bat on. We took a bit of time and then it got a bit better. We knew batting would be tougher in the second innings as the wicket was to get slower. This game was very important for us to be in the series. We just stayed on the wicket and I’m happy to score runs for the team. 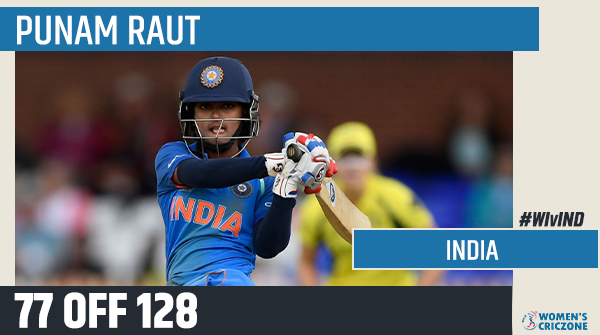 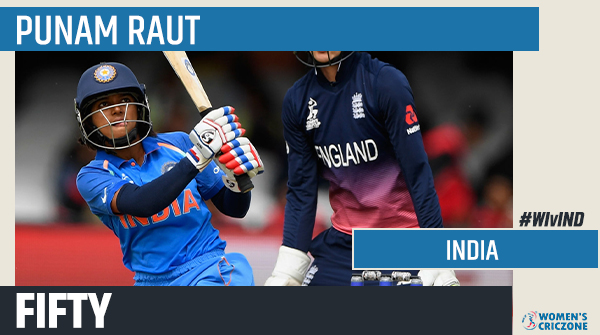 Big fish netted!
IND 83/3 in 28.5 overs. India would have perhaps thought of targetting Sheneta Grimmond's off-spin. But she is the one to have broken the 67-run stand between Mithali Raj and Punam Raut. She tossed one up around off and middle. Raj looks to work it around the corner but ends up getting a leading edge straight to Afy Fletcher at mid-wicket. Big wicket to lose for the tourists, given the stature of the captain. She goes for 40 off 67 balls. Is this the break that West Indies needed to make inroads?
Spin batting lessons
IND 60/2 in 23 overs. It is always a joy to watch Mithali Raj. Against spinner, her silken footwork is still better than most of the youngsters playing the sport. One tossed up ball from Afy Fletcher, the leg-spinner was nicely driven inside out by her through the gap between covers and midd-off. Then she used her feet against Anisa Mohammed's off-spin and hit it over her head for another four. Contrastingly, Punam Raut has just found it tough to get a move on against spin. A couple of her outside edges fell short of slip as well. Perhaps she could take a leaf out of her partner's book. Figure this: Raj is on 30 off 47, while Raut is on 18 off 56.
Pacing up...
IND 38/2 in 15 overs. 21 runs have come off the last five overs, including a maiden over. Mithali Raj has hit a couple of fours in the phase. She is currently on 15 off 23 balls while Punam Raut is on 12 off 32 balls.
First boundary for India
IND 23/2 in 10.3 overs. Mithali Raj creams one through the gap between mid-off and covers off Shabika Gajnabi to bring the first four of the innings. It was all about timing, that. Beautiful.
Gajnabi's dream run continues!
IND 17/2 in 9 overs. Shabika Gajnabi's honeymoon phase in the current series against India continues. After turning around the first match in West Indies' favour, here she is, snapping up Priya Punia in her very first over. She lands it on a length outside off, Punia looks to punch it off the back foot. But the ball bounced a touch and seamed just a tad away. That was enough for the ball to grab the outside edge. Shemaine Campbelle behind the wickets does no mistake. Punia walks back dejected with a 5(28) against her name.
Early strike
IND 5/1 in 2.4 overs. West Indies strike early and it is an early departure for Jemimah Rodrigues. Maiden ODI wicket for Aaliyah Alleyne. Rodrigues looks to drive it on the up but miscues it horribly. The ball goes towards mid-off, where captain Stafanie Taylor makes no mistake. Perfect start for the hosts, not so for Rodrigues, who goes for a seven-ball duck.
West Indies XI
Kyshona Knight, Stafanie Taylor (c), Shemaine Campbelle (wk), Sheneta Grimmond, Natasha McLean, Chedean Nation, Shabika Gajnabi, Aaliyah Alleyne, Anisa Mohammed, Stacy-Ann King, Afy Fletcher.
India XI
Priya Punia, Jemimah Rodrigues, Punam Raut, Mithali Raj (c), Harmanpreet Kaur, Deepti Sharma, Taniya Bhatia (wk), Shikha Pandey, Mansi Joshi,  Rajeshwari Gayakwad, Poonam Yadav.
Stafanie Taylor (WI)
It’s a new day. We were looking to bowl first. Feel that there might be something on the pitch. It was a very exciting game (the first ODI) and we are hoping it will be like Friday.
Mithali Raj (IND)
It’s a good wicket to bat on and might slow down in the second innings. We would like to put up a big score on the board. We have made only one change – Ekta Bisht comes in for Gayakwad. We are hoping to put up a better performance.
Toss
Mithali Raj calls it right and India will bat first. Looks like the tourists are confident of hunting the target down, after failing to do so in the first match.
Welcome!
Hello and welcome, wherever you are! It's time for the second ODI between West Indies and India to get underway. The hosts are one-nil up and the tourists have to pull up their socks rather quickly. Remember, it's just a three-match series, so time's a little less in that sense. In the broader perspective, there are Championship points up for grab. Let's hope for a good game. And I, meanwhile, hope that the stream is good (unlike the first ODI) for us to have a little bit of fun and bring to you that element. ;) We'll get you the toss and teams in a bit...

Spin to win was India’s mantra as they successfully defended what seemed a below-par total. Poonam Yadav, Deepti Sharma and Rajeshwari Gayakwad all contributed with the ball after Punam Raut struck a half century to help India beat West Indies by 53 runs in the second ODI at the Sir Vivian Richards Stadium in Antigua on Sunday (November 3) to level the series 1-1. Two partnerships. That’s what India’s score of 191 for 6 was based on. First a 66-run stand between captain Mithali Raj and Raut brought them on track. And then, Raut was joined by Harmanpreet Kaur – the…