It's a wrap!
The West Indies men's side won an ODI series after five long years earlier today but the women couldn't stand up against a belligerent India that took the Daren Sammy National Stadium in St. Lucia by storm. 1-0 up are the tourists, but they'll be well aware of the capability of the hosts. Moreover, they wouldn't forget in a hurry that they won the ODI series after being 0-1 down. Not much turnaround before the second T20I at the same venue on Sunday (November 10). Hope you enjoyed our coverage tonight! See you for the second T20I. Till then, ciao!
Player of the Match
Shafali Verma has been adjudged the player of the match for her scintillating 73 runs off 49 balls. She has Veda Krishnamurthy as the translator: Feeling very happy about the whole thing (her performance). I feel confident about opening the batting because I have been doing that from the beginning. Happy to open and bat with Smriti Mandhana. 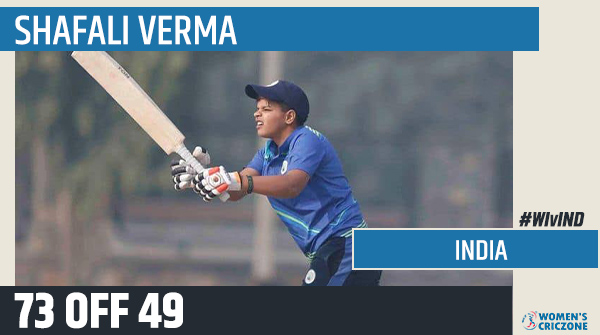 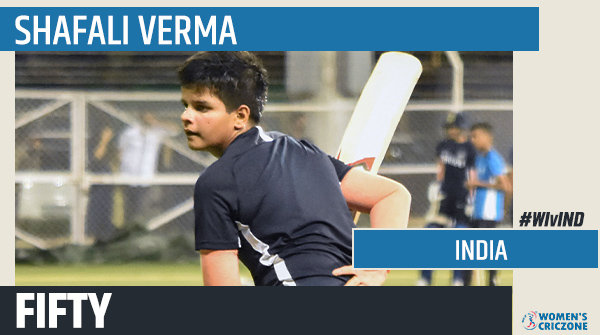 Butter-fingered McLean!
IND 94/0 in 9 overs. Afy Fletcher had managed to apply some brakes to India's scoring after the power play. As a result, there was some attempt by Smriti Mandhana to break the shackles. She charged down and lofted one down long off's throat. But Natasha McLean there got to the ball and let it slip through her hands for four. Rubbing salt to Fletcher's wounds.
Powerful play!
IND 77/0 in 6 overs. Smriti Mandhana and Shafali Verma have gotten off to a flying start. India would be pleased with this after being put in to bat. The left-hander is on 31 off 18 while the young right-hander is on 43 off 18. Will the leg-spinner Afy Fletcher be the one to provide the breakthrough for West Indies?
India XI
Harmanpreet Kaur (c), Shafali Verma, Smriti Mandhana, Jemimah Rodrigues, Veda Krishnamurthy, Shikha Pandey, Poonam Yadav, Taniya Bhatia, Deepti Sharma, Pooja Vastrakar, Radha Yadav
Live Stream? What's that?
As was the case with the first ODI, the stream for the first T20I has been an issue and is now up after India have raced to 50/0 in 3.3 overs! Shafali Verma has got off to a rollicking start getting to 30 off just 13 with Smriti Mandhana at the other end on 17 off 9. We shall update India's playing XI soon...
West Indies XI
Anisa Mohammed (c), Shemaine Campbelle (wk), Stacy Ann King, Kyshona Knight, Chedean Nation, Natasha McLean, Afy Fletcher, Hayley Matthews, Aaliyah Alleyne, Chinelle Henry, Shakera Selman
Toss time!
Surprise first up! Anisa Mohammed has walked out for the toss for the West Indies instead of the regular captain Stafanie Taylor. Perhaps she hurting her knee in the final ODI might have something to do with it. Wonder if the hosts would mind this, as for starters, West Indies have won the toss and WILL BOWL FIRST. Team updates shall follow...
Hello peeps!
A warm welcome to all of you, from wherever you are joining us. We're glad to have you with us for our coverage of the first T20I. The ODIs began well for the hosts, who went 1-0 up only for the script to then pan out on the expected lines. Yes, India won it 2-1 but T20Is are a different ballgame. For starters, the tourists have a different leader. And then some different personnel as well. This is India's last bilateral series before the T20 World Cup early next year. Their aim would be to nail a couple of spots down, including the no.6 position. For West Indies, this is (possibly) their final assignment before the mega event. While the absence of Deandra Dottin would be a major factor, captain Stafanie Taylor's form and Hayley Matthews return, that promised a lot before being cut short by an unfortunate call in the final ODI, could mean that we have an interesting series in the offing. Hope you are set for the T20 ride with us, that will be on for five matches in this series. Toss and teams in a bit...

Shafali Verma and Smriti Mandhana’s 143-run stand for the opening wicket helped India beat West Indies by 84 runs and take an early lead in the five-match T20I series in the first T20I at Darren Sammy National Cricket Stadium in St Lucia on Saturday (November 9). The rollicking start by the pair powered India to post an imposing 185 for four wickets after being put in to bat. 15-year-old Verma found gaps comfortably and clobbered the erring West Indies attack to help India reach 50 inside four overs. At the end of six overs, they had raced to 77 for…