The equation now in the tri-series seems pretty simple. If England win, England and India will play the final on Wednesday. But if Australia win, the net run rate will come into play and that will affect India greatly as their NRR is -0.071. So, we possibly have a contest on our hands tomorrow - Australia vs England, with all to play for. Hope you enjoyed our coverage today and join us tomorrow. Adios!

It was a perfect run-chase for India and they have to give credit to the openers Smriti Mandhana and Shafali Verma. The 85-run stand in a very quick time just set the platform and Verma was unlucky to miss out on their fifty. But Mandhana played the perfect spoil and batted responsibly to bring up her half century - a slow one that - and almost carried the side home.

Out in the 19th over. Played foil to Verma, Rodrigues. Tried taking some pressure off Harman. Sedate in some patches, unrestrained in others. Rate this 48-ball 55 among Smriti Mandhana's top 5/6 T20I knocks.Responding sensibly to the needs of the chase at different phases was key

Nothing really went Australia's way on a track that still had plenty of runs in it. Yet Megan Schutt's 4-0-26-1 stands out. And that's why she is regarded highly in the sport. What was strange to see from Meg Lanning was her reluctance to use more of Jess Jonassen or Sophie Molineux, perhaps, just because of Mandhana's presence. Will this defeat affect their morale?

Harmanpreet Kaur: "We’re really happy. It was important for us to win and got the job done. That's about T20. On the days when bowlers don’t do well, batters have to step up. Shafali played well and Jemimah then stepped up and kept up the pace."

Meg Lanning: "I thought we batted reasonably well. Unfortunately we didn’t have a set batter in the last few overs. We’ll recuperate as we usually do and look to play better tomorrow."

Ashleigh Gardner's 93-run knock earned her the Player of the Match award. Here's what she had to say: "Obviously, I tried to score runs for the team and put them in a good position. Thought we had enough in the mid-innings break but shows how good a track it was for batting. With the sun beating more, the track was flat enough. We can learn from this game and go again tomorrow."

Deepti Sharma, promoted up to number 5, sealed the game with a couple of hits to the fence. And not to forget, yet again Harmanpreet Kaur stayed till the end. It is a comprehensive win for India.

Smriti Mandhana got to her 11th T20I fifty in just 44 balls. She hit one down to long on to get to her landmark. It was a smart knock because of the fact that it allowed Shafali Verma and Jemimah Rodrigues to go smoothly at the other end. She almost anchored the run-chase well. 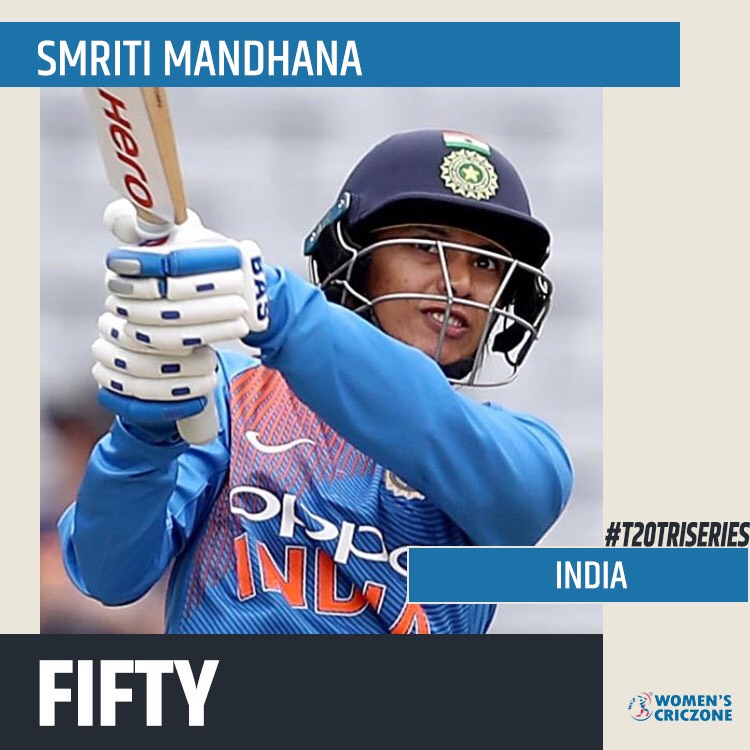 But she eventually fell for 55, being adjudged LBW off Nicola Carey. It was a strange call because she was down the track then. Perhaps job done.

Australia have managed to get a hold on the proceedings in the last three overs, giving just 19 runs away. One of those was due to a juicy full toss which was thumped for a biggie by Harmanpreet Kaur. Will Australia manage to sneak in a win?

It was a nothing shot by Jemimah Rodrigues which led to her downfall on 30 off just 19 balls. She hung her bat out to a harmless ball outside off and ended up nicking it to Alyssa Healy behind.

They may be the 'Wrong Sisters' but Smriti Mandhana and Jemimah Rodrigues are surely smashing the Aussie bowlers. Despite Shafali Verma's fall, the duo has gone around milking runs almost at the same pace. Rodrigues has managed to show some delectable drives and deft touches and is on 29 off 17 while Mandhana is on 34 off 28.

Heartbreak for Shafali Verma and delight for Ellyse Perry. She pulls a short delivery straight to Nicola Carey at deep mid-wicket. She departed for 49 off just 28 balls.

Loved that last shot from Shafali for one reason. On 49, looking at her first fifty in Australia (a big deal for any batter), she still went for the big shot, the team first option.

This is the new generation of Indian batters. #AUSvIND

It was a brilliant innings from the youngster on a track that has been conducive to positive strokeplay. She treated seamers as well as spinners with aplomb. Perhaps gave Australia a dose of their own medicine.

This has been a terrific start given by the openers for India. Shafali Verma has, like Ravi Shastri used to say, "thrown the kitchen sink" at whatever she has been delivered with. And as Lisa Sthalekar has been repeatedly stressing on-air, she has largely kept a steady base. She is on 46 off 22 with Smriti Mandhana for company on 18 off 13.

This is a rapid start from India! Verma has eight boundaries in 15 balls! #AUSvIND pic.twitter.com/7JRNFf7laL

"She's simply good, especially if she keeps her feet still," exclaims Lisa Sthalekar on air about Shafali Verma. Verma managed to hit three fours off Ellyse Perry and one against Jess Jonassen. Smriti Mandhana also hit one against Jonassen in the first over.

Not very often Perry collects her cap having gone for 12 off her first over. Impressive stuff from Verma #AUSvIND

Yes, Australia batted well. Yes, India didn't do greatly with the ball. But their efforts on the field is what would be hurting them more. Taniya Bhatia had a day to forget behind the stumps. There were a couple of chances that went down and even the ground fielding wasn't good. The result? India have a mountain to chase.

India did really well to keep Australia to just above 170. 200 looked imminent at one point. Tells a thing or two about India's bowling. Fielding lapses cost them quite a bit today, Ashleigh Gardner was certainly a beneficiary of that.#AUSvIND #T20TriSeries

Ashleigh Gardner had a wonderful day with the bat. She walked in early, got her eyes in and then carted the Indian bowling to all parts of the ground. Meg Lanning joined the fun as well as the duo added a quick 79 for the fourth wicket.

Did you miss @akgardner97’s innings?

Despite the carnage, Deepti Sharma had respectable figures of 4-1-27-2. She managed to keep even the likes of Gardner and Lanning quiet. How will India approach the chase, now that they have the freedom to take the attack to the opposition? We'll find out shortly.

Only 20 runs were scored in the last three overs, thanks to the departure of both Meg Lanning and Ashleigh Gardner. India then managed to slow things down quite a bit. Happy ending, perhaps.

Ashleigh Gardner was caught on the sidelines for a chat and here's what she said: "Very good batting surface. I was watching the game yesterday and the wicket seemed a bit two-paced. Don’t know about the bowlers, it is a good surface for batters."

Ashleigh Gardner looked poised to get to her maiden T20I ton but it wasn't to be. Radha Yadav changed her line of attack and went over the wicket and slowed it up. Since mid-off was in place, Gardner looked to go over the top. Ended up miscuing it to Deepti Sharma, who backtracked from that spot. An impressive knock nonetheless.

Now it will be interesting to see how much India can limit Australia to.

Shame for Gardner to miss that maiden ton.. this is now the perfect chance for Haynes to try and find some form #AUSvIND

Taniya Bhatia has had a forgettable day behind the stumps. After fluffling the stumping chance off the very first ball of the game, she gave Ashleigh Gardner a chance in the 15th over. Perhaps she might have been blinded by the fact that Gardner went down the track and ended up yorking herself and missing the ball.

However, Deepti Sharma then got rid of the dangerous Meg Lanning for 37 (22). A short ball was pulled straight to Smriti Mandhana at deep backward square leg. Meanwhile, Gardner is just 12 away from her maiden T20I ton...

Meg Lanning has joined the fun now, changing gears and attacking whatever's been thrown to her. Thanks to her and Ashleigh Gardner, Australia have managed to take 34 off the last three overs. Gardner is on 76 off 44 while Lanning is on 22 off 15.

Nailing it literally @akgardner97 . This one looks like a 180+ if Indian bowlers don't pull off a miracle or something.#AUSWvINDW

It has been an attacking second T20I fifty for Ashleigh Gardner. She got a flatter ball just outside off that she thrashed off the back foot through covers for four to get to the landmark in just 33 balls. She has really taken the attack to India ever since she walked to the middle on the third ball with Australia 0/1. Can India stop her soon?

Harleen Deol gets a wicket in quite an unlikely way. She tosses a nice juicy full-toss. Beth Mooney could have deposited it to any part of Melbourne. But she smashes it straight to Smriti Mandhana at deep mid-wicket. Indians are sure delighted. There was a bit of doubt if it would have been over waist but Mooney was down the track. She goes for 16.

Though India began with a wicket-maiden, Australia have recovered more than just well, thanks to Ashleigh Gardner (34 in 24) and Beth Mooney (14 in 9). They have attacked both seam and spin bowling and the end of the power play should come as a relief to Harmanpreet Kaur & co.

Happy beginning for India. Deepti Sharma deceived Alyssa Healy on the very first ball of the match, with Healy coming down the track and missing the ball completely. But Taniya Bhatia fluffed an easy stumping chance.

However, on the very next ball, a shortish Sharma delivery was pulled straight to Arundhati Reddy at mid-wicket. Healy departed for a blob, her sorry run in the series continued. Bhatia would be thanking her stars that her miss didn't prove costly.

Toss update from the Junction Oval in Melbourne: Harmanpreet Kaur calls it right and India will bowl first.

I want a win for Australia as much as I want a hair as perfect as the @ElyseVillani do on channel 7 !

It's match 5 of the T20I tri-series in which the hosts Australia take on India at the Junction Oval in Melbourne. Australia would be seemingly confident heading into the clash. They would be welcoming Meg Lanning back in the XI after she missed out against India the last time. Will Erin Burns make way for her or will Nicola Carey miss out? Will they make any more changes?

The tourists', meanwhile, would be desperately aiming to win this one and more than that, would be hoping that their batting clicks. India's bowlers have done well in the series and it's the batting that needs to stand up. Will they hand a debut to the young Richa Ghosh? Will they get Pooja Vastrakar back? These are some questions, the answers of which will be revealed shortly. Stay with us!

India cruised to a seven-wicket victory over Australia in the T20 tri-series at Junction Oval in Melbourne on Saturday (February 8). The victory was set by India’s openers Smriti Mandhana (55) and Shafali Verma (49). The duo put on an 85-run stand for the first wicket which laid the foundation for the run-chase. Earlier Ashleigh Gardner’s 93 off just 57 balls propelled Australia to 173, but alas, her efforts went in vain! India, by virtue of their victory, stayed alive in the tri-series. India opted to bowl first and made one change in the team. They brought in Harleen Deol…